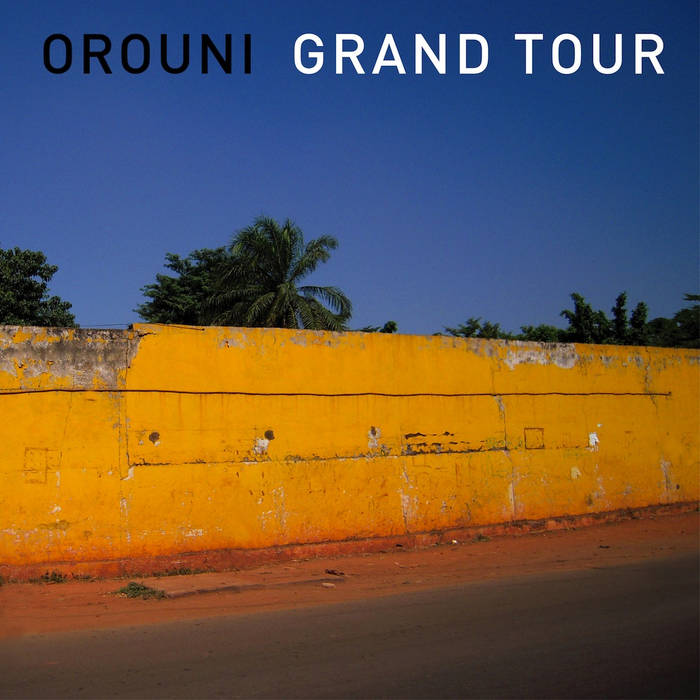 Grand Tour, the third album by Orouni, was put together like a travel journal, written and composed after a journey around the world that lasted over a year. The 12 songs on the album, not to mention two remarkable B-sides, each correspond to one of 14 destinations (Corsica, Berlin, Mali, Thailand, South Africa, Senegal, Australia, Japan, Brazil, Finland, New York, China, Chile and Lebanon).

Orouni brought back instruments from this series of short trips to create his album. He systematically played the cavaquinho, charango, kalimbas, balafon and other finds with complete disregard for their traditional use in order to conjure up countries other than those they are from. He also returned with a myriad of touristic sensations. The texts, like those of Bob Dylan, take the form of mosaics. They never offer a unified image of the described situation, the so-called “big picture,” but rather recall a juxtaposition of details, characters and quotes (“Take the train and go, go to Hanko and its green casino but you won’t be able to gamble on the archipelago”). And, as with Dylan, the resulting impression is that of a narrator who attempts less to explain what he sees than to use his writing as an extension of his perception.

A trip around the world in terms of geography, but also in terms of the author’s artistic influences. Expanding a horizon that was essentially folk (on his first album, A Matter Of Scale), and then power pop (on the second one, Jump Out The Window), Orouni now unleashes music with extraordinary instrumental and musical depth. While the spirit of defunct label Elephant 6 (Olivia Tremor Control, Neutral Milk Hotel, Elf Power, Of Montreal) floats over certain tracks, this is perhaps because Orouni infused this album with the spirit of emulation that once drove the Athens collective, by calling on members of a certain large brotherhood of French indie pop (Jean Thevenin, drummer of Frànçois & the Atlas Mountains, as well as Toy Fight, (Please) Don’t Blame Mexico, The Rodeo, Mina Tindle, Angil & the Hiddentracks, Syd Matters, Thousand, Les Colettes).

But, above all, this proliferation highlights the work of one of the most impressive composers in France. With their beauty and originality, songs such as “In The Service Of Beauty”, “Firearms” and “Wild Geese And Cigars” are sure to mark the musical year of those who would like to embark on this Grand Tour that Sauvage Records now proudly features in its catalogue.

Recorded by Guillaume Jaoul in Saint-Cloud + Villetaneuse (Microbe studios), Saint-Ouen and Ivry-sur-Seine.
Timpani, trombones and piano (The Devil And The Monk Seal) recorded by Martin Delafosse in Paris.
Cello and violin recorded by David Quattrini in Paris.
A few things recorded in various apartments.

A fascination for ambitious compositions, a strong attachment to the art of songwriting: Orouni’s songs make room for vocal and instrumental melodies with complex harmonies and instruments that are rarely used in contemporary pop music (balafon, kalimba, mbira ...). In Orouni’s music, the Kinks dance with Chassol, Belle & Sebastian dance with Dylan and Malian music plays with the Beatles. ... more

Bandcamp Daily  your guide to the world of Bandcamp

Interviews With Butcher Brown and Slauson Malone, plus LP of the week by SAULT.